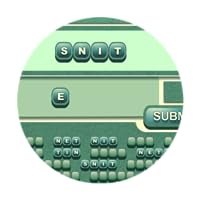 Word Scramble 2 is a game where you will be given 5 letters. You will need to use these 5 letters to form words.

You will be surprised how addictive it is!

There are already MILLIONS of gamers playing Word Scamble 2 on the web for FREE!

- Classic but challenging gameplay: The words need not contain all the 5 letters so you can form a lot of words.
- You will earn a score each time after forming a word and you will gain extra bonus if you can form all the words.
- Use the mouse the drag and drop the letters to create words.
- Similar to other casual games involving word like Dropword and WordSearch
- Personal high scores / leaderboards show you how you stack up to beat your previous score
- Requires Adobe AIR

Don't bother with your Xbox, Playstation 3 (aka PS3), or the Nintendo Wii. Our games and similar games can be found on sites like Kongregate, AddictingGames, Shockwave, Miniclip, Yahoo Games, Mindjolt, Facebook, Pogo, and PopCap. What are you waiting for? Download Word Scamble 2 today and you'll be playing for hours on end totally FREE.

If you end up liking Word Scramble 2 there are lots of other free games from Fupa Games:

Access our site only where you can play over 40,000 free online games or download some of our other Android:
http://www.fupa.com/